Looking to the past in Somaliland 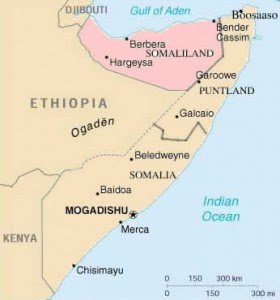 Somalia is one of the most benighted places on the planet. Staggeringly violent, desperately poor, it regularly comes last in any ranking of the nations of the Earth. Since the collapse of the Somali state, nearly twenty years ago, the country has become a extremely dangerous anarchy. The capital Mogadishu, once known as the Pearl of the Indian Ocean, now stands in ruins.
Somalia is the number one example of a failed state. It has no government.
In the face of this breakdown, it is worth considering that the state of Somalia, created in 1960, rests on two historic foundations: the former colonies of Italian Somalia and British Somaliland. Under the repressive regime of Said Barre, the two were forced into one. The fall of his regime, and the subsequent collapse of the state led to the emergence of a separate government in the former British Somaliland.
It is by no means a utopian state: it remains extremely poor and undeveloped. However, compared to the rest of former Somalia, Somaliland is a beacon of order, prosperity and even to some degree, of freedom. The territory- unrecognised by any other as an independent state- has managed to create a better life for its population than Somalia ever did. The disorder, violence and piracy that are the chief characteristics of Somalia do not disfigure the more tranquil Somaliland. Peaceful government and peaceful transfers of power have become the norm in the Somaliland capital, Hargeysa. Yet the emerging country can not draw on any assistance from overseas: it remains unrecognised. This excludes the desperately poor Somalilanders from any aid or assistance programmes, and it is also an increasing threat to the hard won peace and stability of the country.
The neighbouring area of former Somalia, Puntland, does not accept the borders that Somaliland has claimed for itself, and there is now increasingly conflict as the Puntland Somalis attempt to settle the border dispute by force. Somaliland can not seek arbitration- it remains unrecognised- and the dispute risks returning Somaliland to the anarchy of the rest of former Somalia, from which it had made a hard won escape.
The African Union, as a matter of policy, does not recognise "breakaway" states- they argue that there are so many border disputes and secessionist movements on the dark continent that to recognise one risks inflaming further many other disputes. Yet Somaliland is different. The creation of the state of Somalia in 1960 was not the granting of independence to a single colony: it was the creation of a new territory and a new state. Given the clearly expressed democratic will of Somaliland to leave the state of Somalia, and to return to the situation that pertained before 1960, it seems entirely just that they should be allowed to do so, and that this should now be recognised by the international community.
The Horn of Africa is a wretched part of the world, but the failure to recognise the reality and the right of the independence of Somaliland is causing even more damage. Recognition will allow Somaliland to seek security for its borders and to open up trade and economic development in its own right.
Given the history of British involvement in the region, it seems only fair that the United Kingdom should now seek to raise the case of Somaliland both with the African Union, and also with the United Nations. If the legal problems of a unilateral recognition can not be addressed immediately, then perhaps Britain should actively sponsor the engagement of Somaliland with the Commonwealth where the Somalilanders are seeking to gain at least observer membership.
Pretending that the rights of the Somalilanders are subsidiary to the wider conflict in former Somalia is condemning an already poor people to continuing poverty, and forbidding them to escape that poverty through their own efforts: this is frankly immoral. Obeying some discredited international legal quibbles should not take priority over the freely expressed wishes and democratic rights of the people of Somaliland.