Science as a candle in the dark 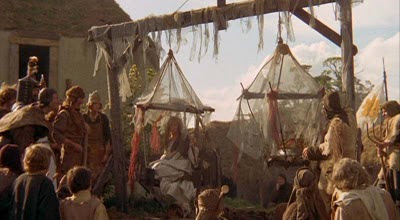 OK so the State of Delaware may not have elected a Witch ("I'm not a Witch, I'm not a Witch..." WHATEVER).
However the United States has elected an awful lot of people whose opinions do not vary a whole lot from such simple superstition. Evidence gathered from peer reviewed papers is not the way that the US Congress conducts its business. Over 95% of the members of Congress- both new and old- have no Scientific background whatsoever.
There are more people in American politics who say that they believe in the "literal truth" of the Bible than those who acknowledge the demonstrable truth of the theory of evolution by natural selection.

If you can not base your political ideas on the Scientific method of sceptical empiricism then you might as well believe in witchcraft and spells to put things right. It is through such methods that we have been able to start to catch the merest glimpse of the spectacular wonders of the Universe, and our place within it. It is not superstition that is providing answers to our most deeply felt questions, but the steady progress of research based on looking for provable truth.
Once, an Astronaut, Jack Schmitt of the Apollo 17 Mission to the Moon, graced the benches of the US Senate. Now it is an array of trial lawyers and social workers. These politicians have a facility with words even while they lack a facility with ideas. Now, whether Democrat or Republican, American politicians are suppose to respond to the feeling of inchoate rage that is said to be the feeling of the American people.
I don't think they can.
I think the whole basis of American politics is now more Superstition than Science, and that is pretty bad for everyone. Ignorance is not bliss, it is fear and misunderstanding. The inchoate, primal fear of the mob may end up burning witches, but it is unlikely to find too many solutions to their problems.
Now America's leaders, from the President and the new leaders of Congress down, have a responsibility to inform their people about the realities that they face, and the price of dealing with the crises.
It is going to be a very difficult task.

Anonymous said…
Whilst I agree with you in principle, the scientific method nowadays has been so highly politicised (=corrupted) that you can find peer-reviewed science to agree with anything the government wishes to fund, as long as the result is "right" and there is enough "consensus", E.G. AGW. At least the new crowd will start investigating that "science" properly, so there may some hope that real, sceptical science may return.
8:54 am

Newmania said…
Not really ,not all knowledge is available to any individual some of it is diffuse. We see this in markets and institutions evolved over time.
Often this is encoded in traditions even superstitions and even were this not the case science is not hard top understand and scientists are not especially honest
12:54 am